Project page with all the details:

Major players in 3D printing are developing new miniature-factory manufacturing cells. Consider them as precursor to Star Trek industrial replicators. They can operate almost without human workers and create very valuable high-tech products. This will be a major shift in decentralized manufacturing and have a huge economic impact.

Benjamin Engel created this great OpenSCAD tutorial where you will learn few useful tips and tricks.

Email ThisBlogThis!Share to TwitterShare to FacebookShare to Pinterest
Click here for more posts in category: cad, design, how to, OpenSCAD, software, tutorial

MITCSAIL developed an interactive system for computational design, optimization, and fabrication of multicopters. The computational approach allows non-experts to design, explore, and evaluate a wide range of different multicopters

Hopefully this software will be open sourced one day. I could not find it online.
Email ThisBlogThis!Share to TwitterShare to FacebookShare to Pinterest
Click here for more posts in category: 3d printed robot, design, drone, MIT, quadcopter, software

Marius Hornberger is a master woodworker who made a video showing how he uses many 3d printed tools in his workshop. Cool stuff,


His Thingiverse page with all of the files: https://www.thingiverse.com/MariusHornberger/designs
Email ThisBlogThis!Share to TwitterShare to FacebookShare to Pinterest
Click here for more posts in category: 3d printed, cool things to 3d print, diy, wood, workspace

DZL created this DIY 3D digitizer and published code and instructions how to build it. 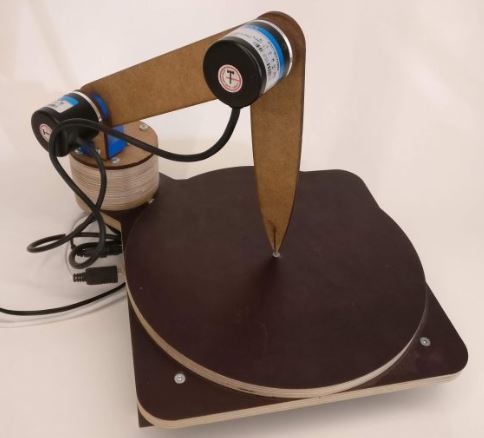 Files are on Thingiverse: https://www.thingiverse.com/thing:3243862


Mini disc sander made from MDF on laser cutter

How to design 3d printable parts that don't need supports

Angus from Maker's Muse YouTube channel has created another great tutotrial on how to design parts that don't need supports.


Email ThisBlogThis!Share to TwitterShare to FacebookShare to Pinterest
Click here for more posts in category: cad, how to, support material, tutorial


BigRep's NOWlab built an electric motorcycle that, excluding the electrical components, consists purely of 3D printed parts. The e-bike, NERA, was designed by Marco Mattia Cristofori and Maximilian Sedlak and NOWlab's co-founder, Daniel Büning, directed the project. As Mashable has previously reported, NERA is not for sale, but it is a use case that highlights what can be achieved using BigRep's large-scale 3D printers and demonstrates the current state-of-the-art in additive manufacturing.

Angus from Maker's Muse shows how to design holes that are easier to print.

Email ThisBlogThis!Share to TwitterShare to FacebookShare to Pinterest
Click here for more posts in category: cad, design, how to, tutorial

Ollie242 replaced an broken old ThinkPad optical drive with 3D printable tray holding a RasPi. It connectes to the notebook with internal wiring. 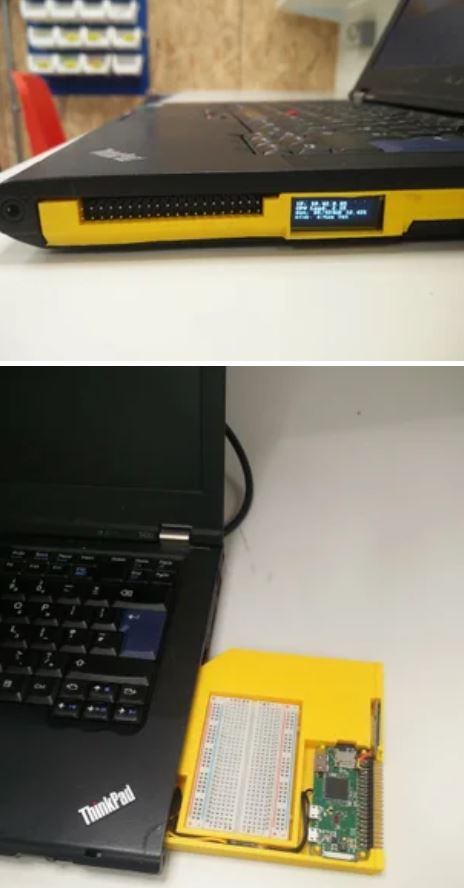 Another great and useful project by GreatScott! who made DIY 3D printable emergency powerbank.

This wind generator uses a new design that can use wind from any direction and still move the generator in a single axis. Very suitable for urban power generation.

CLS Architetti 3D Print a House in One Week

How to cut 6mm plywood with your DIY 3D printer

Tech2C is cutting 6mm Plywood, to make a motor bracket,  with a Dremel style rotary tool attached to his HyperCube 3D Printer. It's a powerfull little mill that can be done on most DIY printers.


Using your 3D printer as small CNC mill for making PCB is a great extension for your machine. This video by Tech2C will show you how to use the HyperCube DIY 3D printer to make electronic boards with DIY mill attachment.

Tutorial on how to hide secrets inside .stl files by Angus

Angus from Maker's Muse shows how to hide a printable geometry or entire objects inside a .stl file.
Email ThisBlogThis!Share to TwitterShare to FacebookShare to Pinterest
Click here for more posts in category: cad, design, how to, tutorial

When you need an extra pair of hands ...

NASA announced the projects to enter the third phase of their 3D printed Mars habitat competition. Here you can see some amazing technological concepts. Hopefully I'll see some of them being used on Mars sometime in the future.

Dexter is a high precision 3d printable robot that can be trained by the human operator.

Dexter is an open source, 5+ axis robotic arm. It is built from 3D printed parts and held together with carbon fiber strakes for reinforcement. Dexter uses five NEMA-17 stepper motors with three harmonic drives in conjunction with optical encoders to get extreme precision, with a 2.5 micron stepping distance and 50 micron repeatablity.

Dexter is also trainable, meaning that you can manually control it and have playback of the exact path it took. This makes it easily programmable for applications.

Dexter can also be controlled with our software, Dexter Development Environment (DDE). DDE utilizes a modified version of JavaScript that allows for a more traditional approach to programming while still being friendly to those who are newer to code. It also contains a simulator that will show playback of Dexter's movements using a pane in the development environment.

Dexter even has a Unity library that one of the members of the Dexter community put together, complete with haptic feedback. This could potentially be used for video games or even real world applications where a Dexter must be remotely controlled

Ivan takes his 3D printed tank for a ride

It's not a full sized tank, but still a great project :-)

Ivan has a great YT channel and documents his project build process in detailed way:

I wrote about Cytosurge technology before. They developed a 3D printer that can print metal on the micro-scale. A true technological wonder. Just imagine small robots floating in your bloodstream to repair your body or extremely complex and fine electronic parts like micro-antenna arrays. Star Trek stuff. This is a technology that makes a large step towards that future.
The company has now improved their machine with ability to print directly and precisely on complex surfaces like existing electronic component boards or microchips. 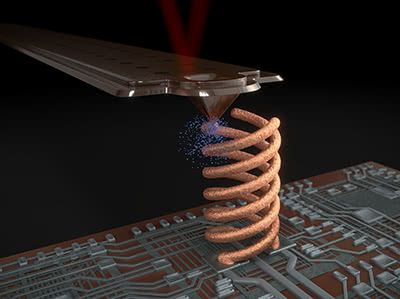 The new pinpoint metal additive manufacturing process is made possible by two high resolution state-of-the-art cameras integrated into the FluidFM µ3Dprinter. The cameras enable automated loading of the print tips (FluidFM iontips), printer setup, calibration and computer-assisted alignment to print on already existing structures as well as the visualization of the finished structures. The bottom view camera is mainly used for internal system processes, like controlling the automated gripping of the FluidFM iontip. The top view camera images the object or surface to print on. With the high-resolution live video, the exact position of the object or surface to be printed on can be manually chosen and set as starting point for the printing process.

This procedure allows the user to print metallic objects on contact pads that are pre-defined on the surface of an integrated circuit, on micro-electromechanical-systems (MEMS) or on other components.

This unique capability of the FluidFM μ3Dprinter to add 3D printed structures directly onto existing objects or surfaces with pinpoint accuracy opens the door to a new world of additive manufacturing of complex metal objects.

I wrote about LBRY before as a great possibility to decentralize your DIY projects and keep them out of corporate controlled platforms. Here is one example of archery project uploaded by Juleah.


Design a chess set that sparks our imagination & win $100 in cryptocurrency. Upload your chess set design (use a zip folder for multiple files) in either STL or OBJ format to the LBRY (library) network. Once finished, email the lbry:// address (automatically receive 10 Library Credits for your first upload) to james@lbry.io by July 4th.

Here is the link to the full post with detailed contest rules: https://lbry.io/3d-contest 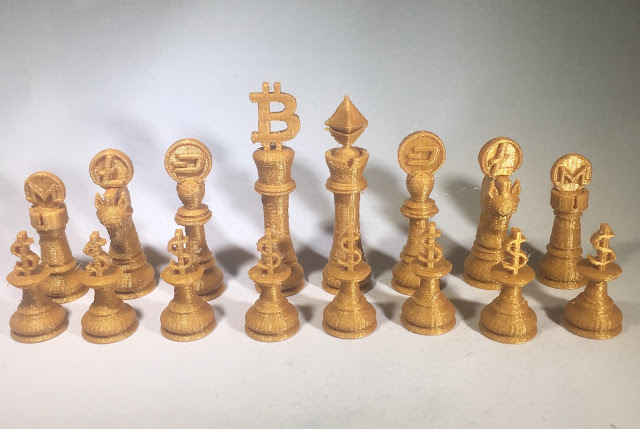 Lulzbot presents their Lulzbot Cluster for manufacturing of 3d printed parts. It's an interesting video that shows the technology and how it evolved and scaled up.

Version v3.0 comes with many improvements and several new features, which will help to maximize the capabilities of your 3D printer.
GCodeSimulator App is the free sibling of the paid GCodePrintr App. Both together have been downloaded from Google Play more than 50000 times and are actively used by more than 6000 users.


GCodePrintr v3.0 comes with several improvements to the UI interface:


The web interfaces design has been refreshed and is now using a responsive web design. Additional functions added:


Extend the list of supported 3D printers and printer electronics:

Many usability improvements (e.g. new help dialogs) to simplify the 1st time use of the App.