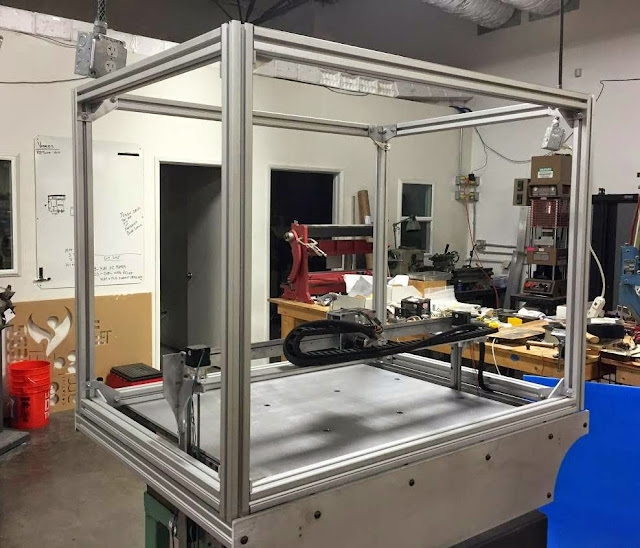 Here is what Brooks writes about it:

I have wrestled with this monster for over a year. I build 5 prototypes from scratch and hated them all. The last one was too ambitious with servos and ballscrews... That last one printed beautifully after, oh, SO much work, but I tore it down the next day and went back to the drawing board... Hacking together a totally new design in a couple days from spare parts lying around-- #6. That served as the model for this fine specimen - #7. Thanks again to Steve, Nick, Mark and Caleb.

The Printrbot Pro is aimed at those who want a very large build volume but don't want to pay the big bucks for other options out there.

It's also the most expensive printer we have ever made, but will be less than the MB Z18. But, not gonna kid ya, shipping will kill you.
We will post pics, video and details immediately. We won't have it at Makerfaire, though. After reviewing it today, I have some details to refine after we get back... Then it's ready for prime time.

We will sell this bot a bit differently... Doing a waiting list and making them one at a time. I may actually interview the potential buyers to be sure of a good fit. We hope to keep a slow steady pace with this one since the market is presumably small. I have a handful of clients already lining up... Really interesting to hear what people plan to do with them! It is intended for businesses and education.
The shop is a buzz about what we all want to print on this thing. The next one we build is for me ;)

Here is what Brook writes about it:

Printrbot Crawlbot lives. It’s big and it’s small. A Cnc router that cuts 4x8′ material, yet occupies a small footprint in your garage. CAD/CAM software included.
Details, pics and video soon to follow. See it live at Maker Faire in a couple days. Price not yet set.

It's still early, but the world will see it in a couple of days anyway. Even though there is a punch list of things to refine, I wanted to share it on the first day I saw it cut with its own software.
That's right, Printrbot makes software, thanks to Mick and Sean - the two newest members of the Printrbot family. Mick is the coder / maker in the pic.

Crawlbot will feature cloud-powered project sharing-- software that runs in your browser but works offline too. Tinyg and raspberry pi team up to run the show here. Mick been working on the software for months. The hardware idea was the usual Brook and Brian brainstorm followed by boots on the ground making it a reality. Thanks to Steve (lead), Mark, Nick, & Caleb.

Designed completely in Fusion 360, btw.
We think you are gonna like it. 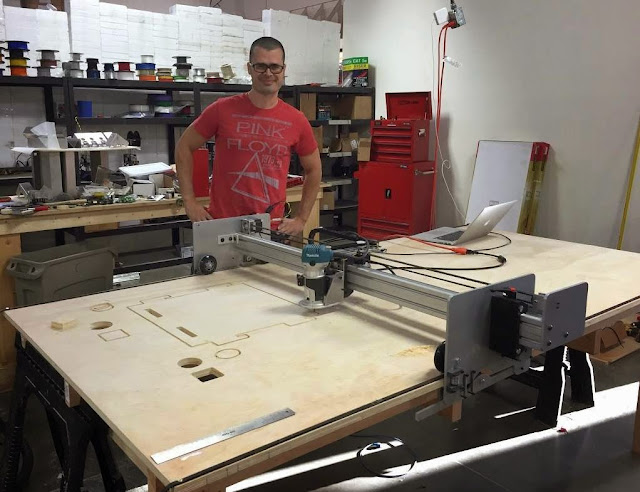