Race for space is getting more heated and 3d printed parts are becoming present in every major project from rocket engines to 3d printed satellites. Everyone is competing: big government agencies, private companies, student groups and private citizens. We have even seen 3d printed open source liquid fuel rocket engine.
3D printed rocket engines can be very fast in production and affordable even as low as 500 USD for the open source version printed by external service provider.

Here are some new developments:

Check out their KS campaign: 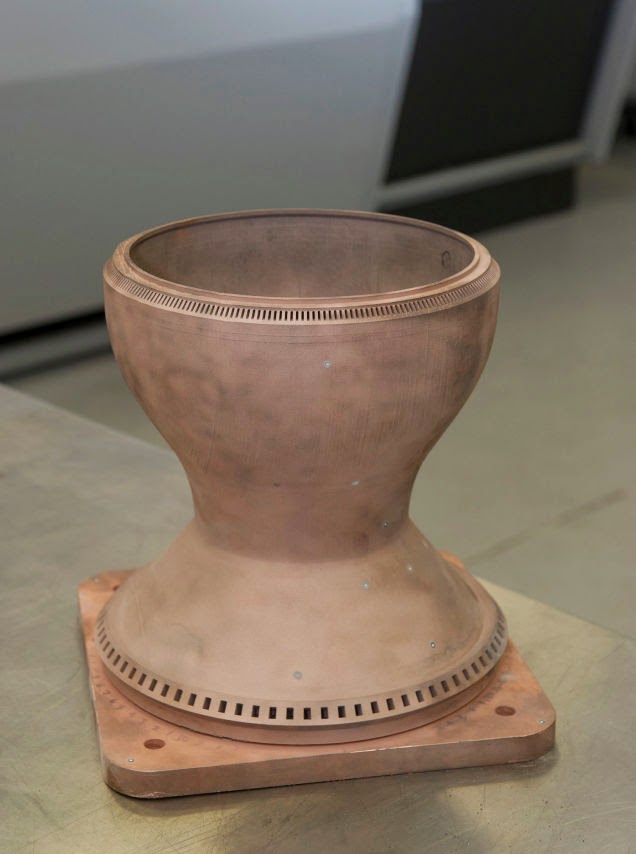 
“Building the first full-scale, copper rocket part with additive manufacturing is a milestone for aerospace 3-D printing,” said Steve Jurczyk, associate administrator for the Space Technology Mission Directorate at NASA Headquarters in Washington. “Additive manufacturing is one of many technologies we are embracing to help us continue our journey to Mars and even sustain explorers living on the Red Planet.”

Numerous complex parts made of many different materials are assembled to make engines that provide the thrust that powers rockets. Additive manufacturing has the potential to reduce the time and cost of making rocket parts like the copper liner found in rocket combustion chambers where super-cold propellants are mixed and heated to the extreme temperatures needed to send rockets to space.

A selective laser melting machine in Marshall’s Materials and Processing Laboratory fused 8,255 layers of copper powder to make the chamber in 10 days and 18 hours. Before making the liner, materials engineers built several other test parts, characterized the material and created a process for additive manufacturing with copper.

“On the inside of the paper-edge-thin copper liner wall, temperatures soar to over 5,000 degrees Fahrenheit, and we have to keep it from melting by recirculating gases cooled to less than 100 degrees above absolute zero on the other side of the wall,” said Chris Singer, director of the Engineering Directorate at NASA’s Marshall Space Flight Center in Huntsville, Alabama, where the copper rocket engine liner was manufactured. “To circulate the gas, the combustion chamber liner has more than 200 intricate channels built between the inner and outer liner wall. Making these tiny passages with complex internal geometries challenged our additive manufacturing team.”

“Copper is extremely good at conducting heat,” explained Zach Jones, the materials engineer who led the manufacturing at Marshall. “That’s why copper is an ideal material for lining an engine combustion chamber and for other parts as well, but this property makes the additive manufacturing of copper challenging because the laser has difficulty continuously melting the copper powder.”

Rocket Lab’s flagship engine, the 4,600lbf Rutherford, is a turbo-pumped LOX/RP-1 engine specifically designed for the Electron Launch Vehicle.
Rutherford adopts an entirely new electric propulsion cycle, using electric motors to drive its turbopumps, and is the first oxygen/hydrocarbon engine to use 3D printing for all primary components.

China is making a progress forward, according to the report by 3ders.org:

Engineers from Institute 41 (part of the China Aerospace Science and industry Corporation) have already successfully tested an engine ignition device that has been created using 3D printing technology.

This is reportedly the first time Chinese engineers tested a 3D printed rocket component, but it seems to be very suitable for the job. Shell structures typically used for the ignition components in rocket engines are very difficult to design and produce, and are very costly and time-consuming to create. Engineers felt themselves bottlenecked, so a team from the ignition technology research laboratory of Institute 41 began incorporating 3D printing into their R&D process.

In collaboration with local manufacturers of 3D printing equipment, these engineers eventually and successfully 3D printed the first set of shells for ignition devices. To ensure these shells met all design requirements, researchers produced hundreds of 3D printed test samples, which were submitted to various extensive testing sequences.

We live in very interesting times... where will you boldly go?