Making a DIY induction heated extruder for your 3D printer

Standard extruders are heated by simple resistive heaters and you basically need to push enough 12 or 24 V DC electric current through a resistor and simple MOSFET.

Induction heated extruders would have many advantages over them: faster heating up, no high temperature insulation is needed and less thermal mass. All of this could make induction heaters light and fast.
The main disadvantage is the more complex electric circuits needed to power it and more complex control unit since it is using much higher voltage and hundreds of kHz AC.

Based on a paper on induction nozzles for 3d printing standard FDM nozzles have several problems:


The extruder tip with inductive heating coil would be physically similar in appearance, but would have several distinct differences:


RepRap builder SB made a post about his induction heated extruder, here is his work and schematics:


The electronics schematics are not yet available.

You can get more details here:

There are other people actively experimenting with this concept like Bulent, who made the extruder and posted a YT video of it working (his videos are not in English, but you will get some insight):


Here is a video showing more details, but again language is not English:


Here is a Reddit thread on an attempt to make one:


Here is a working DIY induction extruder from Japan made by "Y Ogawa". He used a modified 3020 CNC machine to move the print head.


Here is the project homepage in Japanese: 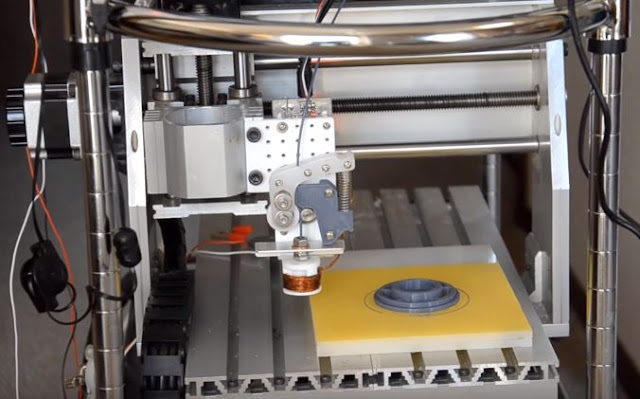 As someone noticed in the comments, it would be interesting to see the induction extuder based on filament with metal particles where induction heats the filament itself. Then you could reduce the mass even further.

Another thing to mention is a possibility that the induction coil will interfere with nearby electronics and maybe emit noisy radio waves. It could also interact with build platform or other parts causing heating or melting damage.

If you want to build a serious desktop induction heater for the metal melting of larger pieces here is a link:

Inductive heated extruders are also being adopted on large scale for plastics industry with many benefits inefficiency and power saving: