Sky Printer is a BIG delta 3d printer which extrudes clay from a toolhead suspended on winches connected to room sized structure. Print results are still rough but the machine is in improvement phase and it is more aimed at artistic exploration. Similar gantry configuration could be used in even larger machines to print entire buildings. 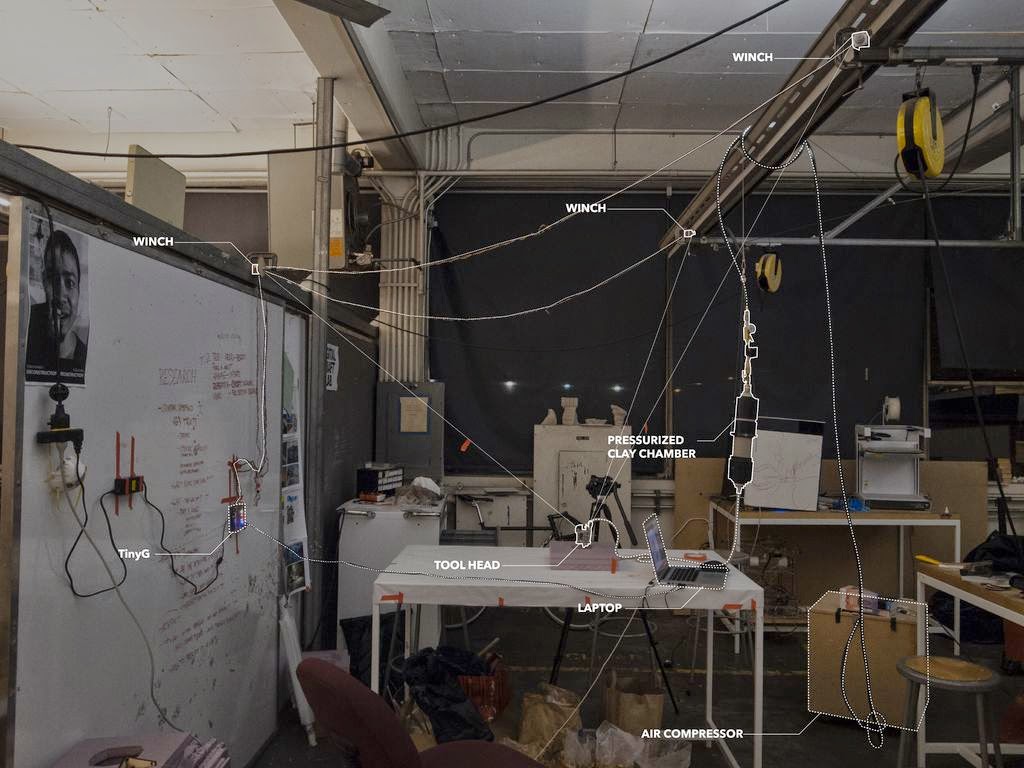 
The Sky Printer is an adaptable, cable-based delta-gantry system that can span large areas with a minimal footprint. The Sky Printer is designed for large- scale applications in potentially remote locations. It can be understood as the evolution of the conventional 3d-printer.
We are a team of two architecture students from California College of the Arts in San Francisco. (team members: Thomas Monroy, Taole Chen)The project was developed in the FA14 Creative Architecture Machines Advanced Studio taught by Jason Kelly Johnson and Michael Shiloh (also check out the Digital Craft Lab which is the overarching research department at CCA).
We think the project has immense potentials that we were only able to graze in the two months we had to develop it and were surprised that no one has really attempted it before us. Although the cable-based system inherently has issues with stability, rigidity and may not be easily adapted to very precise applications, there are distinct advantage that point to an exciting future for computer-aided construction: Within the constraints of the studio class, we focused on additive clay printing as a method to test the system, but the Sky Printer is really much more than just a printer, as we envision it to have an exchangeable tool set that would include grapplers, drills, spades, analysis tools, etc.


Here is a video of Sky Printer in action:

Detailed instructions, STL files for the parts, clay mixture and technical specifications can be found here: