Home electronics manufacturing is one step closer with FirePick project which gives you fully functional pick-and-place machine that can also serve as a 3d printer. The entire design is open sourced and can be made for some 300 USD in "hacker" version. 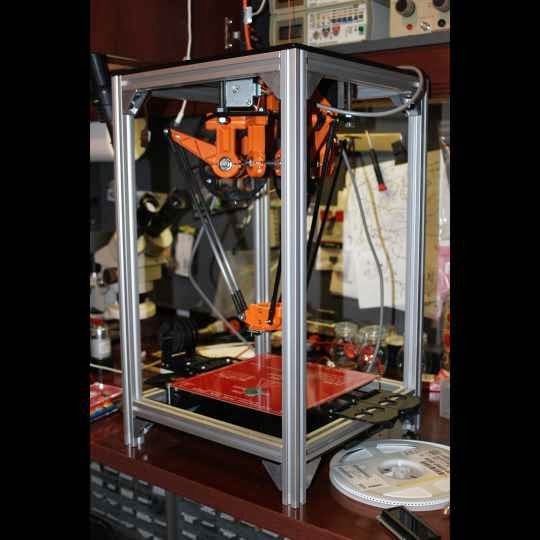 ...video of the machine in action is under the text ...


FirePick Delta is an open-source electronics manufacturing system, inspired by RepRap and powered by OpenPnP and FirePick's own Computer Vision software. We are taking the beginning steps towards a smart appliance that can manufacture electronic circuit boards in a home or office environment. Our machine is able to assemble open-source hardware boards like Arduino and Raspberry Pi accessories, and also has the capability to 3D print. It features an auto-tool changer that allows multiple plastic extruders, and/or multiple SMT vacuum nozzles. Other tools and applications will be available as our product matures.

FirePick Delta is an affordable, open-source electronics manufacturing system that sits on your desktop. It's capable of building complex electronic circuit assemblies, like Arduino and Raspberry Pi accessories. It is also able to 3D print plastic parts, just like a standard 3D printer. It assembles circuit boards just like a conventional pick-and-place machine, by using a vacuum nozzle and camera with computer vision to pick up surface-mount parts from component feeders, and precisely place them down on the circuit board. Our machine has an auto-tool changer, and we're working on designing other tools besides the SMT vacuum tip and the 3D print hotend. The system is capable of holding up to four tools and interchanging between them automatically. This also makes it one of the most versatile 3D printers out there, because it can print in four colors of plastic (or in four separate types of plastic, which would allow a single model to have a mixture of PLA, ABS, nylon, and NinjaFlex, for example).

Pick and place machines are used around the world to assemble electronic circuit assemblies, however they usually sell for $50,000 to $500,000. Our machine has a price point of $300 to $5000, depending on modules installed. We should be able to hit that price point by leveraging the open-source technology of the RepRap 3D printer movement. The FirePick Delta is designed to almost completely self-replicate. It is capable of 3d printing its own parts out of PLA or ESD-sensitive ABS plastic. It will also be capable of assembling its own electronic circuit boards. We plan to be the first successful, commercially available RepRap 3d printer to have the power of electronics self-replication. We envision a future where anyone can design (or download existing) electronic projects, and manufacture them in their own home, rather than outsourcing to a traditional factory. This approach saves time and money, and is a much more sustainable solution. FirePick Delta will enable a new wave of small businesses and entrepreneurs to provide unique, bespoke, niche items to the general public, that would be unprofitable for a large conglomerate corporation to manufacture. If you've ever had an electronic project that involved soldering surface-mount electronics, this machine is an incredibly cheap and fun way to do it. If you've ever wanted to sell an electronic board that you've created, and need a way to make lots of them, this machine is for you.

We would eventually like to cover three basic demographics:

(Note many of these are not practical to place, until we get our feeders and vision 100% working)

Here is a video of FirePick in action and the main components: