BAE Systems is major military and aerospace technology company and they have presented some future concepts.

Scientists and engineers at BAE Systems have lifted the lid on some futuristic technologies that could be incorporated in military and civil aircraft of 2040 or even earlier.

Smaller unmanned aircraft -- or UAVs -- are created by super high-tech on-board 3D printers, via Additive Layer Manufacturing and robotic assembly techniques. The 3D printers respond to data fed to them by a remote control room where a human commander decides what should be produced.

The UAVs are best suited to each scenario -- be it a group of wide-winged aircraft for protracted or enduring surveillance -- or rotary-winged UAVs to rescue single civilians or soldiers from dangerous situations. After use the UAVs could render themselves useless through dissolving circuit boards or they might safely land in a recoverable position if re-use was required.

This creates the ultimate adaptable taskforce, with a lead aircraft able to enter any unknown scenario and quickly manufacture an effective toolset for any task.


Now, let's think about this: 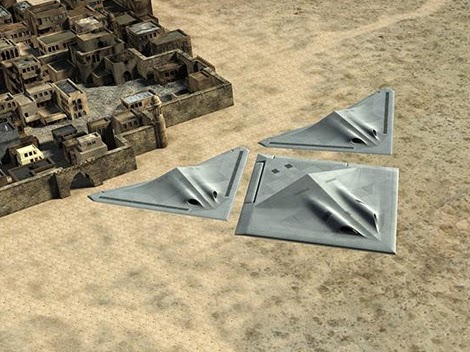 Only two weeks from this article there is a confirmation that US military is actually working on 3d printed warheads: