3DPrintTech is a free software from India that will enable you to print objects larger than your printvolume by splitting them into smaller modules.

3DPrintTech is CAD plugin for model splitting and nesting for efficient batch printing. It helps the user to print objects larger than build volume of a 3D printer. App splits the large model in small components as per your printer settings. It also creates the connectors to help you glue the components to make your original large model. User can define various parameters of splitting.
User has an option to scale the model. Also to get separated view of split parts can use Explode.
3DPrintTech has unique feature 3D Nesting. 3D Nesting helps you combine many small components in one single printing process by 3D packing with clearance. This helps you to save time, energy and money.

3DPrintTech also provides the option of Export to save the split parts or nested parts as stl files which can be directly use for printing.
Also user can do all these processes for his/her own customized printer too by adding it to the existing list of printers.
As 3DPrintTech is developed by using Confluence Framework, it supports: In future versions of 3DPrintTech using Confluence Framework, it will support more CAD softwares like Revit, Rhino, Creo, NX etc.

From the press release:


Pune, India - July 25, 2014 – Centre for Computational Technologies Pvt. Ltd. (CCTech), a CAD and CAM product development company, announced today launch of new application 3DPrintTech for maker community. 3DPrintTech helps maker to build object larger than build volume of any 3D printer. App also provides the functionality to pack small objects in given build volume which help to save time and money to user. 3DPrintTech is currently available for FREE of cost and works as CAD plugin with Autodesk Inventor 2014, AutoCAD 2014 and SolidWorks 2013.

3DPrintTech is designed for maker community who faces challenge to print larger objects on small 3D printer quickly. Processes of converting your design into small parts are time consuming and require good CAD modelling expertise. We realized there has to be a better way for this particular problem. Our R&D team came up with an application that can divide design of large object into small connectable components within few minutes. App also provides user option to control the cylindrical connectors as per his requirement. User can define the connector in terms of radius, length and taper angle. User also control the distance between the connectors, distance between connector and object surface.
Next problem of maker community is packing of multiple components in one print batch. One option for maker is to manually pack as many possible objects within build volume. He has to make sure that packed objects does not intersect or touch each other. To solve this problem, we provide a feature called 3D Packing. It creates the batch of 3DPrintings from collection of many small components. In our benchmarking, we found that for many cases our 3D Packing helped to reduce the 3D Printing batches from 10 to 1. This is definitely going to help makers to print more objects in less time and less money.

3D printing is continuously evolving technology. Therefore app has provided an interface to add your custom printer. App provides many utility functions such as Exporting processed objects to 3D printable STL file, Explode objects for quick inspection, scaling the object for unit conversion or fitting into printer. As 3DPrintTech works within a CAD system so you can do multiple design iterations without leaving the CAD application. All the 3DPrintTech operations are nondestructive and hence keep your design intact. 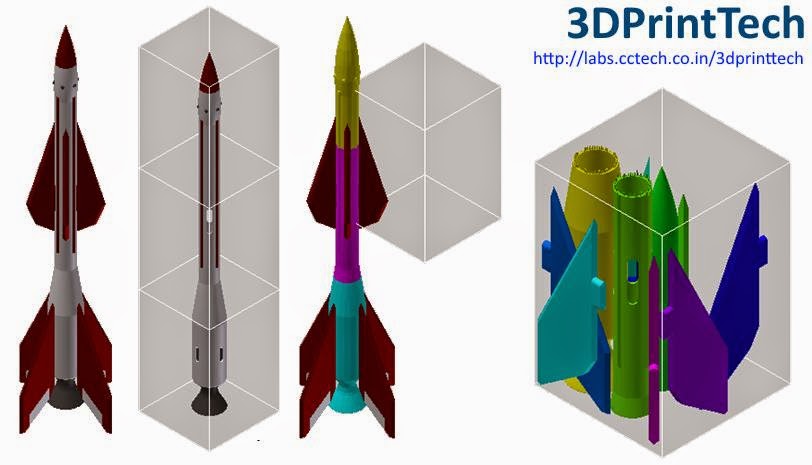