This Delta is heavily modified Kossel derivative which uses DC motor powered servos instead of stepper motors developed by team led by mad.hephaestus.

On each axis is a small board containing a magnetic encoder, and a continuous rotation servo. With this setup, the makers are able to get 4096 steps per revolution with closed loop control that can drive the servo to with ±2 ticks.
The electronics and firmware are fully redesigned configuration when compared to the usual 3D printers. The motherboard uses a Pic32 running at 80MHz. In parallel with hardware, the communication between the host and printer has been completely redesigned, instead of g-code, the team is using the Bowler protocol for sending packets over serial, TCP/IP, or just about any other communications protocol you can think of.

The final aim is to create much cheaper powerful 3d printer that would cost in 200 - 300 USD range. 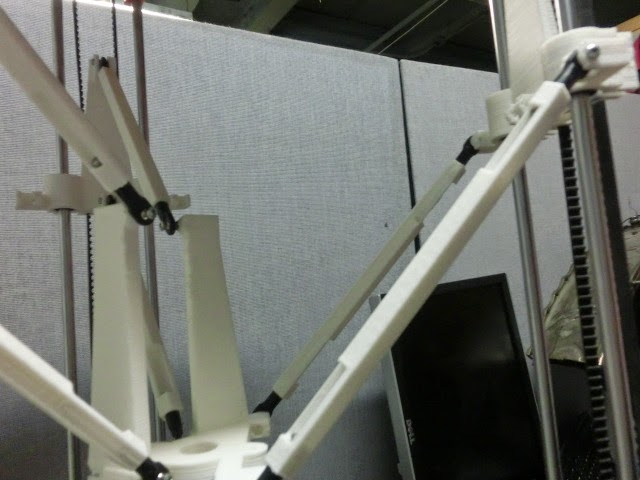 There is lot of discussion on the project page and on hackaday about viability of this technology. I don't know much about all the stuff they use, so it will be lot of new stuff to learn. Maybe it will be the standard in the future.

Here is a video about closed vs. open control systems:

Here is a link about differences of DC vs. servo vs. stepper motors: