GE has many advanced 3d printing projects, this is a new one. Direct Write technology will 3d print sensors and components to enable machines to form internet-of-things or industrial internet.


If you feel that the world has become a buzzing beehive of connectivity, wait a few years. A recent report from CISCO estimates that only a small fraction of the devices that could be talking to each other - 10 billion out of 1.5 trillion, or just 0.6 percent - are actually connected. CISCO estimates that the number will jump to 50 billion by 2020, potentially transforming the way we live and the global economy.
Many of the connected “things” will be intelligent machines equipped with myriads of tiny sensors harvesting data and sending it over to the cloud for processing. Scientists at GE Global Research are now experimenting with a technology that could speed up the transition to link up machines and put sensors where they've never been before.

The technology, called Direct Write, allows machine designers to use special “inks” to print miniature sensors directly inside jet engines, gas turbines and other hot, harsh and hard to reach places. “We can use it to print sensors on 3D surfaces,” says James Yang, engineer at GE Global Research who is leading the project. “One day they could be anywhere.”
Yang and his team are using a computer-controlled syringe filled with a special ink to print the sensors (see video below). One ink type uses a conductive mix of fine silver, copper, platinum and other metal particles. A different set of printing liquids resist electricity and use metal oxides instead of pure metals. Yang says that this is handy since “changes in resistivity can give us information about changes in the part.”

The Direct Write technology emerged in the 1990s when DARPA, the Defense Department’s research agency, was seeking a way to print electrical circuits on flexible surfaces. The method is currently being used by the electronics industry to manufacture cellphone antennas.
Yang and his team are using Direct Write to print 3D sensors that can withstand 2,000 degrees Fahrenheit and handle high mechanical forces. The sensors could help engineers better understand what happens inside machines and come up with better designs. They could also allow customers to harvest data they could not access before, optimize machine performance and spot problems before they get out of hand. 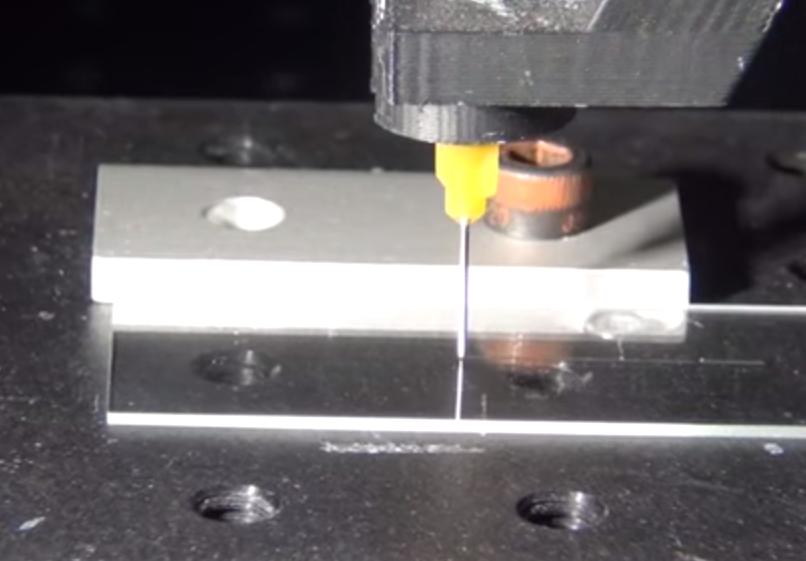 GE is gigantic corporation but still this reminds me of one much cheaper wire embedding project: