When I bumped into Abram Thau at Metrix Createspace in Seattle's Capitol Hill, he showed me a few printed figurines, including a Storm Trooper (of the Star Wars variety), and I thought at first that he had printed them as duplicates of similar-sized commercial products. Not so: It turns out these are made-from-life, specifically from cos-players who have stood on Abram's human-suitable turntable (powered by a chicken rotisserie motor hooked to a 3-D printed pulley) while he scanned them in.

Thau's apartment is practically shouting distance from Metrix, but that pulley was made on a large Deltabot filament printer in the corner of his living room. (A living room usefully cluttered with tools, bottles of resin, projectors in various states of repair, and more printed objects.) More interesting still, Thau's figurines are produced with a home-built resin printer. Resin is messier to work with than the filament feedstock of RepRap/Makerbot style printers (and the resin itself has a slight odor), but it allows different results. Overhanging pieces are possible without requiring elaborate support pieces built into the mesh, and the resulting product can be noticeably smoother than typical filament printing, though all 3-D printing techniques are getting better. Thau didn't buy one of the commercially available resin printers, though (like FormLabs's), but instead decided to build his own out of scavenged and off-the-shelf components.

Budget concerns and improvisation rule the day (Thau is also a grad student, studying to be a middle school teacher): That means there's a book holding up the projector which is vital to curing the resin, and the printer's case is recycled from a previous one. The results look as good as the affordable commercial ones I've seen, and he's excited to teach others to make their own. Third-party resin makers and a robust market in used projectors mean that other hobbyists can follow his lead and turn their friends into figurines 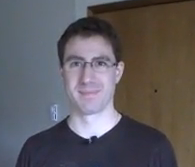