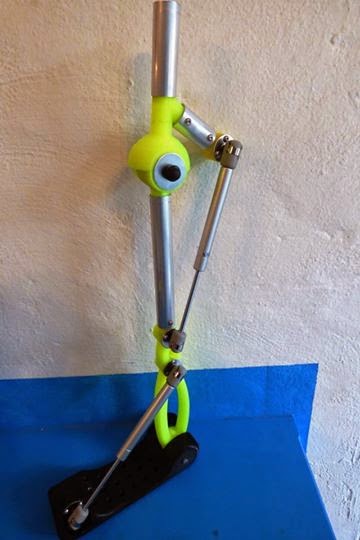 Here is the official blog post about it with more information and pictures:

Excerpt from the source:

In the research that Robohand has conducted with patients who have prosthetic legs, the two main issues facing them are; 1. They are not comfortable, creating pressure sores on the bits they have left and 2. The functionality is limited in that the ankle does not respond, or they need to “kick out” the leg when they step which is completely unnatural. This in turn is causing secondary pain in the form of hip displacement and limping.
Richard van As has taken his idea of a simple, functional, low cost prosthetic leg, and with the help of several great minds, brought his concept to fruition. Robohand are lucky to have two Interns from the University of Pennsylvania, Pele Collins studying Mechanical Engineering and Applied Mechanics and Steven Rybicki studying a BSE in Bioengineering, who both applied and received a grant from the University to fund their Internship. Our colleague from Robohand Australia, Grae Scheuber who besides having a BSc (Hons) is a scripting genius, Ian Pells Robohand Cape Town with a Bachelor of Arts Fine Art, Higher Diploma in Education and Master of Arts in Fine Art, Leonard Nel VP Information Technology for ShadowMatch with a BSc in Electrical & Electronic Engineering, held a makers weekend from 16-19 May where the designs for RoboLeg were refined, scripted, printed and assembled.

If you want to see how DIY compares to hig-tech expensive medical devices see: