Can you guess which is better?

I recently had the opportunity to work with a great guy named Jose Delgado, Jr., a 53-year old who was born without most of his left hand. I made a 3D printed prosthetic hand for Jose and, after using it for a while, I asked him to give me some honest feedback about how it compares to his more expensive myoelectric prosthesis. This is obviously not an "apples to apples" comparison in terms of the devices, but the real value of a prosthesis comes from how useful it is on a day-to-day basis, and that is the focus of the comparison here.

This 3D printed prosthesis is a completely mechanical design. There are a series of non-flexible cords running along the underside of each finger, connecting to a "tensioning block" on the top rear of the device (the "gauntlet"). The tension is caused by bending the wrist downward. With the wrist in its natural resting position, the fingers are extended, with a natural inward curve. When the wrist is bent 20-30 degrees downward, the non-flexible cords are pulled, causing the fingers and thumb to bend inwards. A second series of flexible cords run along the tops of the fingers, causing the fingers to return automatically when tension is released.

3D printers are coming down in price rapidly. As of today, you can get a self-assembly kit starting at around a few hundred dollars, and a fully assembled "prosumer" level printer is going for around $1000-$2000. In other words, this kind of technology is becoming very accessible, and it's opening up some very exciting possibilities! 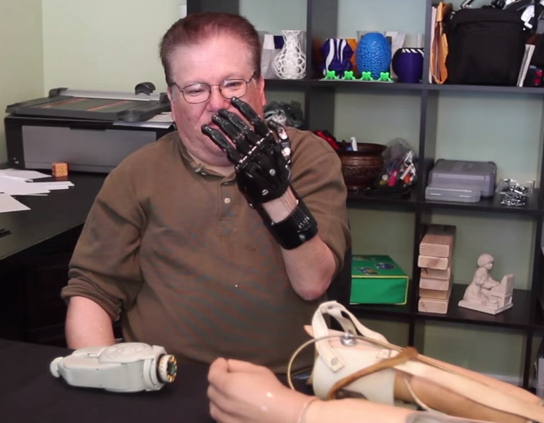