Check out Stratasys founder, chairman and head of innovation Scott Crump braving the slopes as he tests what could be the world's first 3D printed skis. These skis are fully functional, built on a Fortus 3D Production System using Fused Deposition Modeling (FDM) Technology and ULTEM 9085 resin.
Stratasys Engineer Dominic Mannella designed and built the skis at our Skunkworks facility. He picked ULTEM because it's a strong and stable thermoplastic that endures a wide range of temperature and moisture conditions -- even a Minnesota hillside in a polar-vortex winter.
The ability to 3D print low-volume end-use parts could be a boon in industries like sporting goods, where personalized ergonomics and custom aesthetics are attractive.


More details with entire build process can be found at: 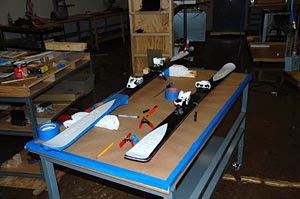