Rappy is very stable since it has position feedback:

Rappy has auto leveling built in:

It can also plot in 2d, which is good for making PCBs:

RAPPY (Rapid Advanced Precision Print sYstem) is a 3d printer which is powered by DC motors instead the usual stepper motors.

DC motors are also commonly found inside toys, because it is cheap and powerful in spite of its small size. Of course, toys are not keen on precise control. So, how do we achieve a high accuracy such as in sophisticated robots? It is only possible with sophisticated controller, which also costs pretty expensive.
Well, that's yesterday.
What we have achieved with RAPPY is precise DC motor control with simple system. We developed revolutionary software and embedded it into a very simple hardware which eventually works like a machine worth thousands of dollars. This is literally a quantum leap in DC motor control. No other system today achieves an accuracy of RAPPY under such a simple architecture.
Now, we are opening a new robot age with DC motor.


It is priced at $699 (tax and shipping not included), if you are first in line for main production delivery. The estimated delivery time is in July 2014.

They had relatively unsuccessful Kickstarter: 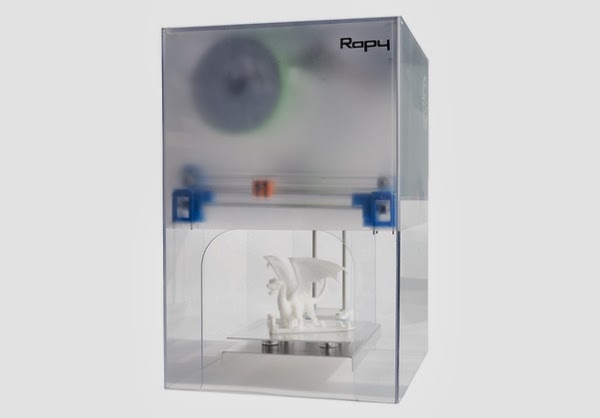 If you want to know more about difference between DC and stepper motors take a look at:


Here is video from Stellamove of anti shock feature and print stability of Rappy32: