Another way to use high-end CNC machine as (low end) simple 3d printer. This project is done by Chin-Kai Chang, Rand Voorhies and Lior Elazary at University of Southern California(USC) iLab. ilab.usc.edu.
Personally, I don't think it makes much sense to do it in their setup with this big expensive CNC, but maybe someone will find a use for their hack.


This is a in progress project that we try to use convention CNC mill/router as a 3D printer. Here, we use Mach3 control software which reads g-code and control the CNC movement. In this setup, we don't need to change the original setup and be able to switch CNC/printing jobs easily. 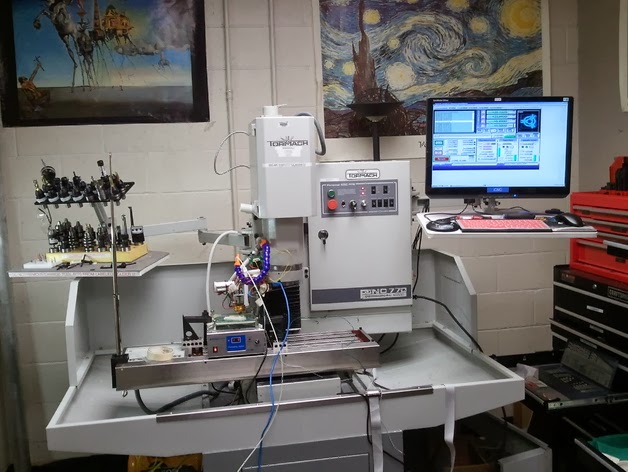 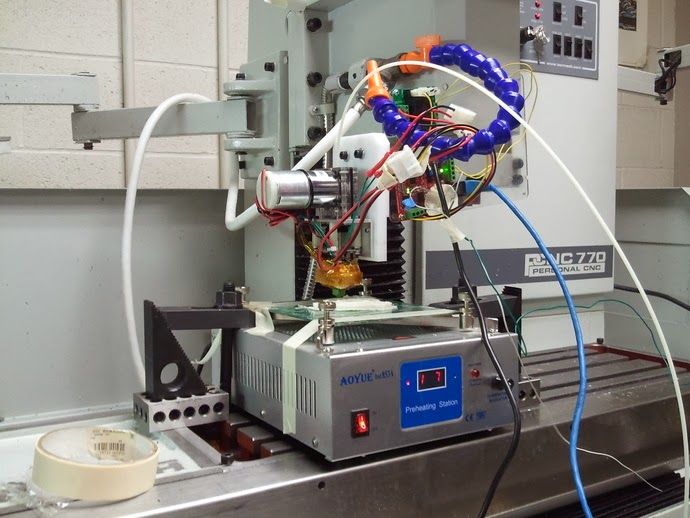 Here is a post about Mach3 software addon that enables it to to all the 3d printing required processing and slicing inside the program:


Instructions from the Thingiverse:

4.Setup Mach3 serial and parallel connection to extruder controller board.

The idea to have both serial and parallel connection is because we assume there will be some latency of serial command in Mach3. So, we use the serial to set target temperature(M104) and motor speed(M108 because this command does not require very precise timing. Then, we use the parallel port to control the feeder to start/stop(M101/M103) as this command needs to run very fast.
In the serial connection, we need to remove the green pin(RTS#) because when Mach3 try to send a serial command, it will also sent a reset signal which cause extruder MCU to reset and lost all current temp/motor setting. In this way, we can even use a serial terminal to check/set other status when Mach3 is running but not sending any serial command.
Here, we hack the coolant pump signal(M8/M9) to replace our Motor start/stop command(M101/M103). We will replace all M101/M103 words to M8/M9 in the g-code later.
5.Generate the g-code from ReplicatorG, as a normal 3D printing procedure. We choose "Cupcake Basic" as our machine driver.
6.Run gcode-clean.pl perl script to create Mach3 usable code.
Even we had implemented all the M-code in Mach3, the g-code still not able to run under Mach3 and requires some adjustment.