3d Systems on CES 2014: they came, they presented and they won

I was never fan of 3D Systems corporate style of marketing, but they DOMINATED the CES 2014 with technology! They presented many new products and technologies and started to remove barriers between high end and prosumer 3d printing machines with CubeJet sub 5000$ jet 3d printer.
Kudos to you 3D Systems! and please PLEASE drop this crazy proprietary cartridges scheme. Let user have some freedom. I think most users hate that.
They seem light years ahead of Stratasys-MakerBot team who showed only different sized Replicators.

Here is long detailed video presentation on most of their new products guided by 3D Systems CEO Avi Reichental.

ChefJet™ Series - an entirely new, kitchen-ready 3D printer category for edibles. The first two printers in the series are the monochrome, countertop ChefJet 3D printer and the full-color, larger format ChefJet Pro 3D printer. Both are expected to ship in the second quarter of 2014.

CeraJet™ - a 3D printer extending our 3D printing portfolio to the ancient artisanal craft of pottery and ceramics. The CeraJet prints intricate and detailed ceramic objects fast using our ColorJet Printing (CJP) technology, that are ready for glazing and firing. It is expected to ship in the second half of 2014.


CubeJet™ - a category defining, desktop 3D printer delivering vibrant, full-color, high-resolution parts for a wide range of modeling and real-use products. The CubeJet delivers the first truly affordable, full-color desktop 3D printing experience and is expected to ship in the second quarter of 2014.
It will be priced UNDER 5000 USD and it is first machine of this price range and type to be sold to prosumer market.

Touch™ - the first-ever haptic-based, consumer 3D mouse for intuitive 3D sculpting and design with instant force feedback that mimics the sense of physical sculpting. Priced at $499 including Cubify® SculptTM software, Touch is expected to commence commercial shipment during the second quarter of 2014.

3DMe® Photobooth – the first compact, integrated physical photography pod that brings the 3DMe experience directly to the retailer floor and event space. Powered by 3DS’ consumer cloud-hosting, publishing and fulfillment platform, it is capable of instant, full-color, realistic 3D face capture for intuitive mashing with a host of personalized and licensed figurines. It is expected to ship in the second quarter of 2014. 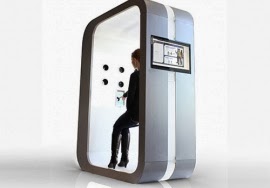 Cube® 3 - the third generation of our popular home 3D printer with a sleek new industrial design and dual color printing for even more creative possibilities. It is kid-safe, easy-to-use and has mobile print capabilities from the Cubify app for iOS, Android and Windows. Expected to ship in the second quarter of 2014.


CubePro™ - the only simultaneous triple-color, multi-materials, large capacity, 3D prosumer printer available today. The CubePro features a controlled environment print chamber that assures high-fidelity performance and delivers professional quality prints consistently and with the ease. Expected to ship in the second quarter of 2014.


iSense 500$ 3d scanned that clips on the IPad. You can also measure and 3d scan rooms and calculate surfaces with it.

They went heavy into toys with Digital Dollhouse and Makie Lab:


BTW, 3D Systems staff  are wearing 3d printed watches they are making in partnership with Nooka: