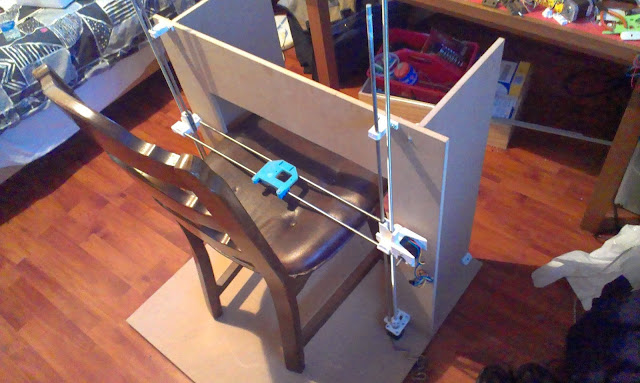 
When I took the pic, I had two really bad rods in the Z axis, and I was waiting for someone to bring two replacements. I just got them, and will likely continue building this project in the coming few days.

I've altered a few designs of the original, like removing a reinforcement from the original x-motor-end so the stepper could be removed without cutting all the wiring and having to re-solder later. I'll also be using my customized Z endstop again, since it works quite a lot better than the original... even though it doesn't hold a particular position quite as well, it's much easier to tweak.

I fully expect I'll have to alter proportions and designs later, but the big advantage of rapid prototyping is that you can make incremental prototypes and just see what they do. I do wish to make a printer with a volume of at least 40x40x40 cm, so that a helmet, a kitchen machine or many other types of objects will fit in partially or completely.

I currently use 12mm MDF and 8mm smooth and threaded rods for construction. I'll probably end up replacing some of those parts once I find out the weak points. I might make a bowden setup at some point, but only once I've got it printing decently with a non-bowden extruder first so I know I can fit quite a bit of extra stuff on the extruder with no worries.

If it all goes really well, I might even experiment with another idea I'd been playing with, using a sugary or salty solution for a support material. One idea that stood out to me is a sugary treat that's commonly used in the netherlands, borstplaat: http://nl.wikipedia.org/wiki/Borstplaat_%28snoepgoed%29
Email ThisBlogThis!Share to TwitterShare to FacebookShare to Pinterest
Click here for more posts in category: diy, large printer, mendel90
Newer Post Older Post Home