Disarming Corruptor is Mac OSX software that can encrypt your .stl files and render them unrecognizable.


From the source article:

According to Plummer-Fernandez his new software, named “Disarming Corruptor”, was born from a frustration with online 3D printing clearinghouses. While trying to upload an artistic rendition of Mickey Mouse to iMaterilize, algorithms within the site rejected the model on the grounds of copyright infringement.
Plummer-Fernandez was further frustrated when he learned Thingiverse had decided to remove / ban 3D models of weapons on their site.

In an interview with Forbes, Plummer-Fernandez expressed his deep concern: “I was confronting all these taboos showing up in 3D-printing around copyrighted material and 3D-printed weapons, and I think these services are leaving their users out to dry.”
In Plummer-Fernandez’s mind, the only way to fix this problem was to subvert the model uploading process by encrypting the designs.

The way it works is pretty simple. A user with any model, whether it be contraband or not, imports their .stl file into the Disarming Corruptor software. Once imported, seven factors that determine a model’s polygon arrangement can be distorted to render the model unrecognizable. At the same time, the software generates a 7-digit code which can be shared within secure communities, allowing downloaders to unencrypt the model.

According to Cody Wilson, founder of 3D printed gun maker Defense Distributed, “[Disarming Corruptor]explodes the idea that there will be certain shapes we can guard against. Information itself is plastic, and it can be molded and changed”.

Disarming Corruptor is a tool for making reversible damage to your STL mesh file. This means you can obliterate it into something totally unrecognizable, share it online under its new guise, and selectively distribute the key code to recipients so they can reverse the damage and retrieve the original object.

In a time of prolific online espionage, crackdowns on file-sharing, and a growing concern for the 3D printing of illegal items and copyright protected artefacts, DC is a free software application that helps people to circumvent these issues. Inspired by encryption rotor machines such as the infamous Enigma Machine, the application runs an algorithm that is used to both corrupt STL files into a visually-illegible state by glitching and rotating the 3D mesh, and to allow a recipient to reverse the effect to restore it back to its original form. The file recipient would need both the application and the unique seven digit settings used by the sender, entering the incorrect settings would only damage the file further.

When patent trolls and law enforcement agencies find these files on sharing sites they will only see abstract contortions, but within the trusting community these files will still represent the objects they are looking for, purposely in need of repair. It could also be used to symbolically decommission files and throw away the keys, or to make something inoperative yet still recognisable so that other users would have to request a key to put it into use.

This is interesting software but I don't see it is strong protection. 7 digit code seems easy to brake with brute force attacks, and .stl sharing sites can easily recognize "messed up" files. True encryption that would change the appearance of a file in something recognizable (ie. encrypting IP protected shape into something that looks like simple toy) would be much harder. 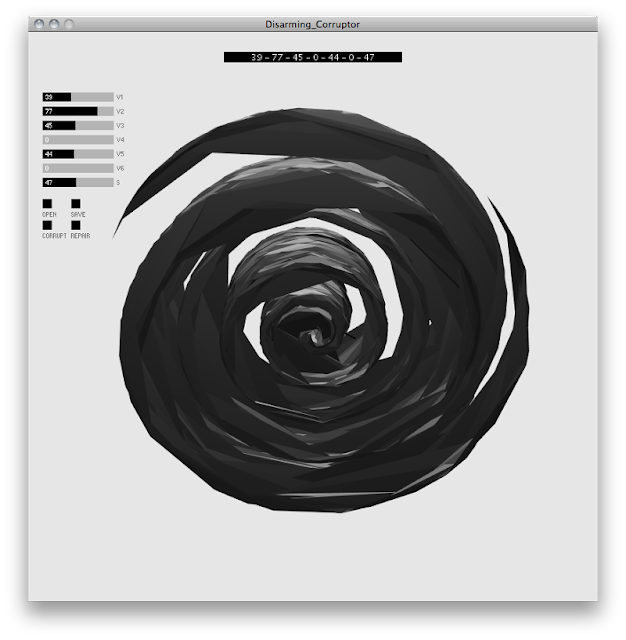 here is a concept of encrypting data into the shape of 3d printed objects: