Create it REAL are research and development company from Denmark focused on 3d printing. They just released 3D RTP v450 the worlds first 3d printing real time processor.  The specification look interesting and it is a sign that the technology is moving forward. I am generally suspicious of companies who develop processing hardware who also develop DRM / control technology which limits users access, since Create IT REAL also developed technology which prevents 3d printing of weapons.

Usually gun control or pornography control is precursor to various controls of intellectual property rights which limit the hardware usability and enforce various payment schemes.
It goes without saying that it is still to be seen how it will work in realistic conditions and independently tested. 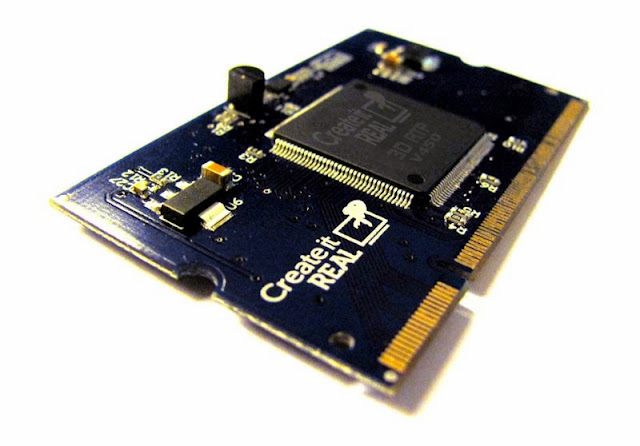 From the company press release:


Create it REAL, a Danish 3D printing technology provider is pleased to announce the first worldwide 3D printing real time processor. After 2 years of research and developments, our team have succeeded in producing a range of chips that are going to boost the 3D printer industry.
Speed is the key breakthrough - the 3D RTP v450 can reach up to 450mm/sec which is some three times faster than typical desktop printers on the market today. 3D printer manufacturers will be able to solve the speed issue - which is blocking market adoption - without changing current designs and mechanics.
The chips are initially targeting Fused Filament Fabrication printers, but are also ready to support SLA technology (Stereolithography) and will support SLS (Selective Laser Sintering) in a near future.
Create it REAL partners will appreciate the ease of integration in their current range of printers. Using only the 3D RTP chip (installed on a standard dim socket), or the full motherboard including all the controllers for the different printer parts, OEMs will be able to release new versions of their products quickly.
Finally, Create it REAL also offers an optional intuitive software to print 3D files, optimized to take advantage of all the features included in the 3DRTP chip. If needed, OEMs can get a complete tailor-made package to meet their exact needs and make sure they offer unique value to their customers.

“Our objective is to support all the 3D printer players, from small start-ups up to large OEMs, and to offer them easy to integrate, state-of-the-art technologies so they can spend their time and resources on their most important assets: their customers” says Jeremie Pierre Gay, Create it REAL’s CEO.


The development kit will be available end-January 2014 for 3D printer manufacturers eager to integrate Create it REAL technologies into their products.