First metal 3d printed gun. This will have impact on industry. There will certainly be exaggerated reaction from public and media with some unnecessary fear mongering.
All parts are DMLS printed except few springs and handles. DMLS machines are VERY expensive and guns like this one are probably produced since decades for various black markets by much cheaper low tech CNC machines.

Austin, TX – Solid Concepts, one of the world leaders in 3D Printing services, has manufactured the world’s first 3D Printed Metal Gun using a laser sintering process and powdered metals. The gun, a 1911 classic design, functions beautifully and has already handled 50 rounds of successful firing. It is composed of 33 17-4 Stainless Steel and Inconel 625 components, and decked with a Selective Laser Sintered (SLS) carbon-fiber filled nylon hand grip. The successful production and functionality of the 1911 3D Printed metal gun proves the viability of 3D Printing for commercial applications.
“We’re proving this is possible, the technology is at a place now where we can manufacture a gun with 3D Metal Printing,” says Kent Firestone, Vice President of Additive Manufacturing at Solid Concepts. “And we’re doing this legally. In fact, as far as we know, we’re the only 3D Printing Service Provider with a Federal Firearms License (FFL). Now, if a qualifying customer needs a unique gun part in five days, we can deliver.”
The metal laser sintering process Solid Concepts used to manufacture the 30+ gun components is one of the most accurate additive manufacturing processes available, and more than accurate enough to build the interchangeable and interfacing parts within the 1911 series gun. The gun proves the tight tolerances laser sintering can meet. Plus, 3D Printed Metal has less porosity issues than an investment cast part and better complexities than a machined part. The 3D Printed gun barrel sees chamber pressures above 20,000 psi every time it is fired. Solid Concepts chose to build the 1911 because the design is public domain.
“The whole concept of using a laser sintering process to 3D Print a metal gun revolves around proving the reliability, accuracy and usability of metal 3D Printing as functional prototypes and end use products,” says Firestone. “It’s a common misconception that 3D Printing isn’t accurate or strong enough, and we’re working to change people’s perspective.”
The 3D Printed metal gun proves that 3D Printing isn’t just making trinkets and Yoda heads. The gun manufactured by Solid Concepts debunks the idea that 3D Printing isn’t a viable solution or isn’t ready for mainstream manufacturing. With the right materials and a company that knows how to best program and maintain their machines, 3D printing is accurate, powerful and here to stay. 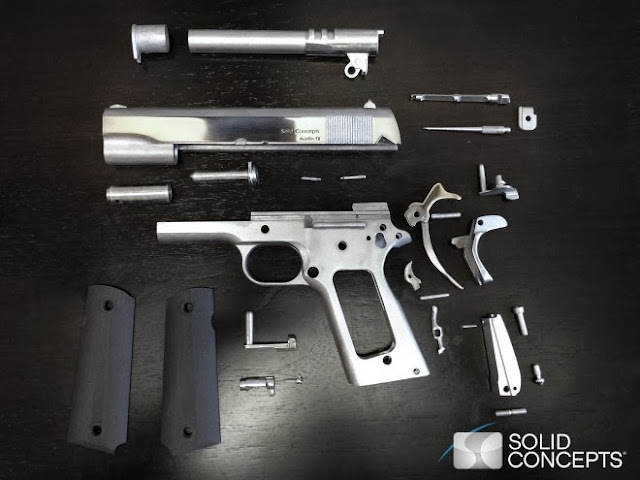 It was successfully tested with 500 rounds fired without failure.