Fully 3d printable prosthetic hand that reacts controlled by smartphone and sensor on healthy limb. By using simple 3d printing materials they sacrifice robustness but give easily repairable prosthetic with easily produced replacement parts. Fingers with three joints are actuated by single motor. It is much cheaper then regularly produced prosthesis.

Function
''Myoelectric Prosthetic Hand'' is an artificial hand that recovers lost functions of amputees. It utilizes electrical signal measured on skin surface of their remaining muscles. A variety of myoelectric prosthetic hands has been developed around the world, however, none of them are offered at an affordable price costing more than $400. We solve this problem in following ways: 1. Using smartphone. Conventional hands required an exclusive device for computation. We replace this with a smartphone which users have. 2. Using 3D printer. One of the main reason that makes components expensive is strict requirement on robustness. In sacrifice of robustness, we offer repairable hand. All components are printable by a 3D printer, enabling users to modify and reproduce them easily. 3. Under-actuated mechanism for finger flexion. To reduce the number of motors, we developed a three-joints finger actuated by one motor that passively changes its trajectory depending on the shape of an object.

Inspiration
Our team has been working on myoelectric prosthetic hand since college days. We were pursuing highly functional hand that can perform strong, precise and diverse motions. Talking with amputees, however, we realized that high functionality is not necessarily the first priority to reduce their daily challenges. ''My only hand is useless because of an umbrella in a rainy day. I cannot eat steak by myself since knife and fork requires two hands.'' said my amputee friend. These tasks don’t require dexterous motions. It is rather the ''price'' of prosthetic hand that restricts amputees from using myoelectric prosthetic hand. Therefore, ''Handie'' is designed to provide amputees with sufficient functions at an affordable price.

Development
We defined Handie's essential function as ''to support the dominant hand''. To realize this, we set minimum number of motors as six: ''thumb rotation'' and flexion of each finger. Thumb rotation is necessary because thumb is facing other fingers when grabbing an object, while it is parallel to other fingers when holding down an object on a table. Secondly, to reduce the cost, we utilized 3D printer. Besides skeleton, we made ringshaped elastic elements placed at finger joints also by 3D printer. Through iteration of prototype, the shape of the element was optimized to have required strength and other properties. Finally, to make the hand easy to repair and reassemble, we separated the skeleton of each finger into units 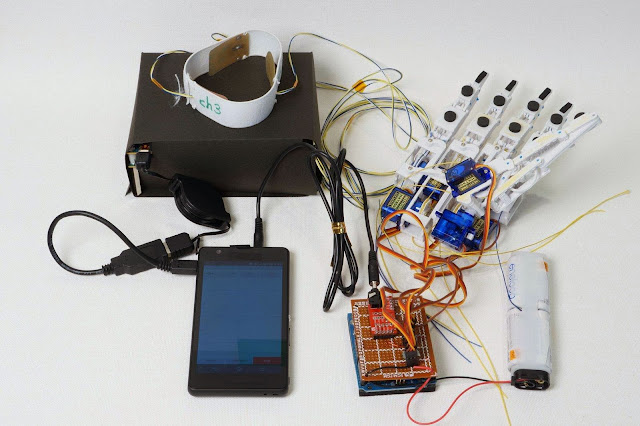