Wearable technology is growing trend. Codeninja made his version of Google Glass technology with help of 3d printing and modified Raspberry Pi. It has retractable and motorized eye piece display, invisible camera inside display box and various sensors, like 3-axis IMU and some environmental sensors.
Not many technical details are available, I REALLY hope that the plans and files will be made available. Please Codeninja! He notes that he is working on making it even smaller.

BTW: it has a cool BORG-ish look doesn't it? I like it. I would even wear it to town. 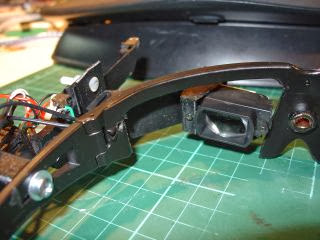 I think that we will see explosion of wearable technology DIY projects in near future including several versions of  DIY Google Glass devices.