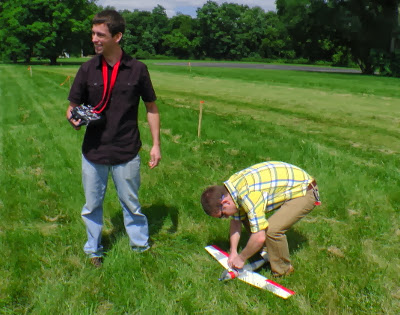 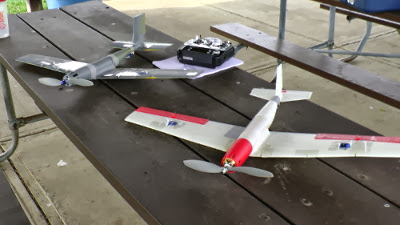 Nathan Kidder, Ben Rhoads, and Brian Jackson are student interns in the AFRL Discovery Lab program directed by Dr. Rob Williams. The program is a partnership between the Air Force Research Laboratory and the Wright Brothers Institute and is hosted near Wright-Patterson Air Force Base at Tec^Edge. Each year, the program hosts a multitude of interdisciplinary projects that are developed by teams of high-school, undergraduate, and graduate students. The DMAV project was part of a collaboration with the AFRL Aerospace Systems Directorate and the Dayton-Cincinnati chapter of AIAA.
During their 10-week research internship at the AFRL Discovery Lab, the trio was tasked with 3D printing a fully functional aircraft from a Makerbot Replicator 2X. The idea behind the project was that a plane could be quickly and cost effectively manufactured using 3D printing. The airframe could be printed for $16 worth of plastic in a matter of hours.
For the first five weeks of the program, the team designed and printed prototypes of their aircraft designs. With two Makerbots at their disposal, the team printed through five revisions before settling on an aircraft design they believed could fly. Stephen Warrener, an accomplished RC enthusiast, agreed to pilot the aircraft.
On the first flight of the morning, the 1.5 pound aircraft was handlaunched into a wind gust by Brian. After a brief session of controlled flight, the plane plummeted into the ground, snapping the nose cone into pieces. Undeterred, the Ohio State University students salvaged the motor and attempted to fly the second plane. "We knew the aircraft wasn't going to survive a landing. That's the 'D' in Disposable," Ben explained after the crash.
Stephen and Brian inspect the plane for damage after landing.
The second airplane, however, landed multiple times without crashing. The next flight was a success despite a rocky start. "It flew, but I was constantly fighting it," Stephen exclaimed after he recovered from a steep nosedive and landed the airplane. The plane went on to fly in two more one-minute flights before a landing which resulted in a fractured wing. The day's flight testing established the team as the first functional airplane with an airframe that was fully 3D printed (no structural aids such as carbon rods or otherwise) using an FDM machine. The aircraft was additionally the first 3D printed low wing plane to be flown. The first video below depicts the initial testing of the aircraft. The second video depicts testing following design modifications and the addition of an onboard camera.


Hopefully they will open source it.