"A new study by researchers in the Built Environment Research Group at the Illinois Institute of Technology shows that commercially available desktop 3D printers can have substantial emissions of potentially harmful nanosized particles in indoor air. Many desktop 3D printers rely on a process where a thermoplastic feedstock is heated, extruded through a small nozzle, and deposited onto a surface to build 3D objects. Similar processes have been shown to have significant aerosol emissions in other studies using a range of plastic feedstocks, but mostly in industrial environments.

In this study, researchers measured ultrafine particle concentrations resulting from a popular commercially available desktop 3D printer using two different plastic feedstocks inside an office. Ultrafine particles (or UFPs) are small, nanosized particles less than 100 nanometers in diameter. Inhalation of UFPs may be important from a health perspective because they deposit efficiently in the lung and can even translocate to the brain. Estimates of emission rates of total UFPs in this study were high, ranging from about 20 billion particles per minute for a 3D printer utilizing a lower temperature polylactic acid (PLA) feedstock to about 200 billion particles per minute for the same type of 3D printer utilizing a higher temperature acrylonitrile butadiene styrene (ABS) feedstock.

The emission rates were similar to those measured in previous studies of several other devices and indoor activities, including cooking on a gas or electric stove, burning scented candles, operating laser printers, or even burning a cigarette."

The development of low-cost desktop versions of three-dimensional (3D) printers has made these devices widely accessible for rapid prototyping and small-scale manufacturing in home and office settings. Many desktop 3D printers rely on heated thermoplastic extrusion and deposition, which is a process that has been shown to have significant aerosol emissions in industrial environments. However, we are not aware of any data on particle emissions from commercially available desktop 3D printers. Therefore, we report on measurements of size-resolved and total ultrafine particle (UFP) concentrations resulting from the operation of two types of commercially available desktop 3D printers inside a commercial office space. We also estimate size-resolved (11.5 nm to 116 nm) and total UFP (< 100 nm) emission rates and compare them to emission rates from other desktop devices and indoor activities known to emit fine and ultrafine particles. Estimates of emission rates of total UFPs were large, ranging from ∼2.0×1010 #/minute for a 3D printer utilizing a polylactic acid (PLA) feedstock to ∼1.9×1011 #/min for the same type of 3D printer utilizing a higher temperature acrylonitrile butadiene styrene (ABS) thermoplastic feedstock. Because most of these devices are currently sold as standalone devices without any exhaust ventilation or filtration accessories, results herein suggest caution should be used when operating in inadequately ventilated or unfiltered indoor environments. Additionally, these results suggest that more controlled experiments should be conducted to more fundamentally evaluate particle emissions from a wider arrange of desktop 3D printers.

In this work, we present some of the first known measurements of which we are aware of UFP emissions from commercially available desktop 3D printers. Emission rates of total UFPs were approximately an order of magnitude higher for 3D printers utilizing an ABS thermoplastic feedstock relative to a PLA feedstock: ∼1.9×1011 #/min compared to ∼2.0×1010 #/min. However, both can be characterized as “high emitters” of total UFPs. These results suggests caution should be used when operating some commercially available 3D printers in unvented or inadequately filtered indoor environments. Additionally, more controlled experiments should be conducted to more fundamentally evaluate aerosol emissions from a wider arrange of desktop 3D printers and feedstocks.

So, I think ventilation, fumes separation and/or extraction, insulated print chambers are the next things in 3d printers.

Looks like someone already had a similar idea, DIY fume cabinet for fumes extraction:

They tested for different things and tests were negative. (HCN from ABS and Nylon).

One of the commentator (Thnx Allister) pointed on a project on Thingiverse: 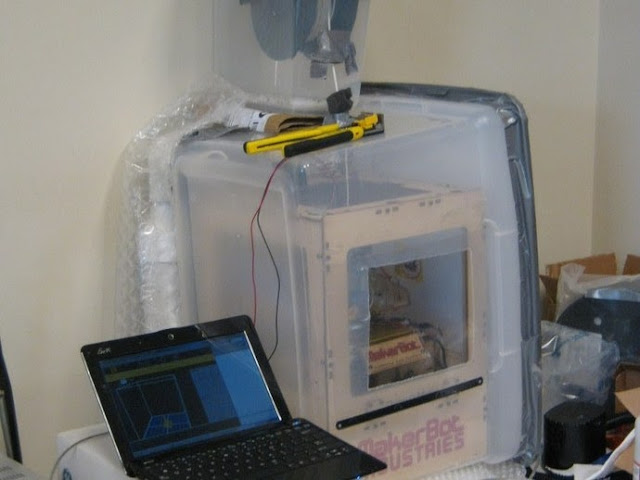