Plastic extruded from this robotic 3D printer solidifies instantly, allowing it to draw freeform shapes in the air extending from any surface.

Unlike normal 3D printers that require a flat and horizontal base, Mataerial prints with plastic that sticks to horizontal, vertical, smooth or irregular surfaces, without the need for additional support structures.

Petr Novikov and Saša Jokić from Barcelona's Institute for Advanced Architecture of Catalonia worked with the studio of Dutch designer Joris Laarman to develop the machine and system.

The process, which the designers call "anti-gravity object modelling", is a form of extrusion that instantly creates chunky three-dimensional rods, rather than slowly building up two-dimensional layers like a standard 3D printer.

"One of the key innovations of anti-gravity object modelling is the use of thermosetting polymers instead of thermoplastics that are used in existing 3D printers," explained the designers.

A chemical reaction between the two components of the thermosetting polymer causes the material to solidify as it comes out of the nozzle, making it possible to print hanging curves.

The speed of extrusion is dependent on factors such as the desired thickness of the material, but in this example the printer produced one metre in approximately three minutes. The movie's frame rate was increased up to three times to show the process more quickly. 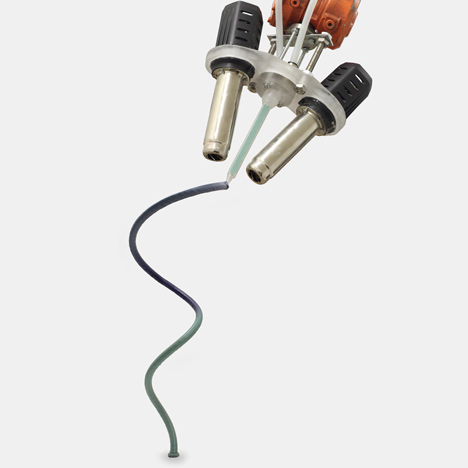 It can now print with metal: