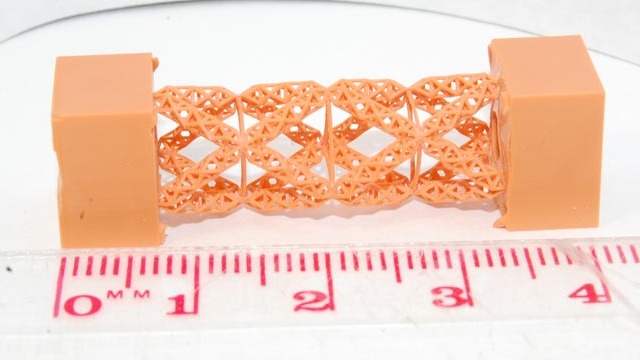 
Yong Mao of the University of Nottingham, UK and colleagues have developed a theoretical framework for building structures where the optimal hierarchical order of the structure depends on the load it needs to withstand. Using this technique, the team constructed such a structure – a simple frame – from a polymeric resin, using a “rapid prototyping technique” – which is an advanced form of 3D printing.
For the first element in their structure, Mao and colleagues simply construct a hollow beam, which they refer to as the “generation-0” element. Different values of thickness and radii of the beam are considered, so that the strongest beam can be built, with the least amount of material. The robustness of this beam is then tested by applying a load along its length and along its axis, to see if it fails across either. “We do this to analyse the failure modes at each local level, so that the structure is not unnecessarily strong at each level…we optimize for what properties are necessary,” says Mao. He explains this further by saying that if a 50 kg table balanced on hollow steel legs it would be about 10 times lighter than one with solid steel legs and just as robust.

Generation-3 element could be ten thousand times lighter then an original with the same strength.
One problem is that the structure has to be very precise and without flaws. Any imperfection could lead to serous defects.

“Even a small imperfection at a local scale could have a large impact as there is no extra material that could take the added stress and maybe that is why this kind of fabrication has not been practical to date,” explains Mao, who says that the team is also studying its models to better allow for such errors. But he is convinced that commercial techniques will improve over the coming year, providing the necessary precision tools. Mao also feels that the recently commercialized technique of 3D printing could really benefit the fabrication of these structures. “We could just upload our deferent designs to a program and people could download and print off the structures at home,” he says.

This is MAJOR discovery and push foreward for 3D printing and additive manufacturing! Let's hope it will be implemented soon in some practical solutions.