Mcor is well known for their unique paper based 3d printing technology. On of their sales staff was stopped by airport security and 3d printed paper hammer was taken as a potential "danger".

Here is what is reported on Mcors blog by that sales manager:


“Last night at the airport, security removed the hammer from my case. When I said it was made of paper he could not believe it, although he did comment that only the weight told him it was not real. He sent for his supervisor – same reaction. They then started to show everyone around and began to talk about making customized tools, parts for cars, phones, was this printer that produced the hammer model really made in Ireland, and many other comments.

In the end the hammer still had to be handed in as I could not take it in my hand luggage because, ‘it looked too real; it could be used to threaten people.’
Sorry I have lost the part. I’ll need another, but if it you could send by DHL it might be safer!”

Mcor’s first family, the MacCormacks, have had several similar experiences with Mcor 3D printed models at airports, but fortunately they had checked luggage and the option to go back and place the models in the checked luggage since airport security did not permit them to bring the models on the plane in their hand luggage.


Mcor used this "incident" and used is as a promotional piece to show how realistic their prints are. Which is completely legit. This story also peaks volumes about safety craziness of our current society ... sheesh, it's colored PAPER!!!

Now, how realistic is Mcors hammer? Take a look at video here: 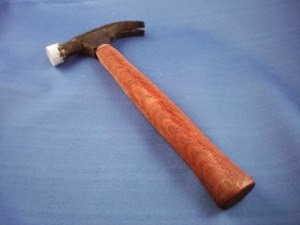